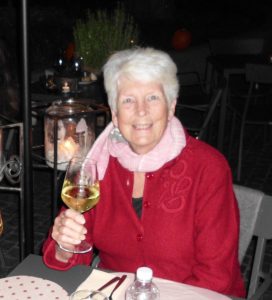 The following is by Rosemary Kennedy (Smith) ’63. Rosemary was a boarder at Cabra in the early 1960s and is pictured with the Leaving Honours class of 1963 in the photo above, and recently, on the right. Rosemary is currently working on gathering reminiscences of life at Cabra in the early 1960s. If you would like to contribute, please email publications@cabra.catholic.edu.au for further information.

I was a boarder at Cabra from 1961 until 1963, mostly a very happy time. I was often reminded of my school days as I travelled around Italy. Here are some journal entries I made as I travelled.

As I write now, memories flood back. I shall add them in italics.

This morning, off to the church of S Maria della Grazie to see the da Vinci ‘Last Supper’, a life-sized fresco painted onto the plaster refectory wall at the medieval Dominican complex.

We had a terrific guide with much info on Da Vinci and his time. … The buildings are of lovely Milanese brick work, and the guide pointed out Milan’s connection with Russia. Early Milanese architects and builders went to Russia to find work in the 17th century.

Peter the Great of Russia was building St Petersburg and needed professional expertise from Europe. I learned about this in Modern History with Miss Irene Boleszny in Year 12.

Da Vinci’s ‘Last Supper’ was very impressive. But what would it be like to be a monk who sat before the Last Supper every day? Would he even notice it? Or would he ease himself into a relationship with each apostle depicted there, knowing about each from the Gospels?

At Cabra our meals in the refectory were noisy and social – no space or time for reflection.

I loved the cloisters where we waited for quite some time, with pebble paved paths through garden beds of flowering azaleas, and a delightful central fountain with by four frogs emitting streams of water into the pool.

The ‘cloister’ at Cabra was an asphalted thoroughfare behind the main entry. When the nun’s meditated before 6 am Mass they avoided the cloister and walked silently in the grounds among trees and roses.

San Maurizio Church. At the archaeological museum here  I learned that the pre-Roman population of Milan were Celts, with religious practices based on seasons and the natural world. They had conquered the original locals, the Etruscans, and were ‘the ruling class’ until the Romans came and conquered them.

I learned about the Gauls at Cabra when I was translating bits of Julius Caesar’s Latin history of Rome. The Gauls that Caesar conquered were Celts. I never knew the Gauls were Celts!

Mediolanum, as Milan was known by Caesar, was a different society from that of Rome. Eventually the Celts were absorbed into the multicultural society of the Roman world.

I am fascinated to note how the Ancient History I studied at Cabra in Year 12 finished with the fall of the Roman Empire, and Modern History started at the Renaissance, so the paleo-Christian and Medieval period, approximately 1000 years, was omitted.

Milan 20 April 2014. Easter Sunday: The Duomo at 11 am for Easter Mass. Singing was OK, but Sister M Vianney, who taught the Schola at Cabra, would have put on a much better show. The swinging of thuribles was excellent though. I have never seen such extroverted swings, including complete circles clockwise and anti-clockwise.

Milan 22 April 2014: Our last day here. We left our bags at the hotel and set off to the Pinacoteca di Brera. We saw a wonderful exhibition of pieta paintings, with a newly restored one of Bellini’s alongside others of the same subject.

I was very familiar with this Bellini painting as I had often seen a print of it at Cabra. It was a picture of Jesus being taken down from the cross into Mary’s arms. It was a small exhibition but very intense, explaining that in Medieval-Renaissance times paintings were a prompt for emotional engagement (empathy) with the events of the Passion. It was a wonderful exhibition, and lovely to have the time to retrace our steps to the beginning and view all the pictures again.

11.30 Mass in the Spoleto Cathedral. Two elderly priests, a good organist and a rickety ‘choir’ of four women. The cathedral was closed to visitors, but the Filippo Lippi frescoes of the life of Mary, behind the altar, were lit up for Mass, and a joy to contemplate.

Fra Fillipo Lippi is one of my favourite medieval painters. At Cabra, several prints of his Madonnas were hung in passageways and class rooms. I loved their daintiness and serenity.

The medieval landscape backgrounds are landscape seen around Spoleto. As soon as Mass was over the crowds of tour groups rushed in and the church lights went off. 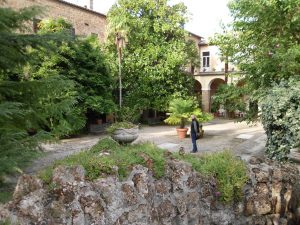 Orvieto is a hill town not far from Rome. We stayed in a very old convent, St Ludovico’s, which reminded me of Cabra when I was a boarder.

Our bedroom ceilings are 12-14 feet high and the floors are of marble. We have single beds, convent size. Each has a black iron ‘headboard’ attached to the wall (but not the bed) …

The focus of the order of nuns seems to be education for women and girls. The convent is vast – 3 stories high and spread around in about 4 wings. There are marble staircases, old paintings of long forgotten prelates and unknown women. There is a very large central courtyard … and a convent garden or orchard full of well-tended fruit trees and flowering roses and herbs. There is a sad sense of lost purpose and mystery in this declining establishment. But who can predict a future for it? Currently a pre-school for the local community, and a tourist B&B, with a Sri Lankan man doing the domestic cleaning. What next?

Matera is in the very south, the poorest part of Italy. We had come to see the World Heritage listed ancient ‘Sassi’ cave dwellings, and stayed in a Monastery-stay convent. The Institute Sacro Cuore is an Italian teaching order with a weekly boarding school for girls from remote parts of the region  attending the high school in Matera. I was amused by watching the boarders and remembering my days at Cabra.

There seem to be about 15 nuns. A couple are elderly Italians and the rest are 3 or 4 Filipinas and one from Kerela, all of whom speak English. About 8 or 9 high school students are weekly boarders. …  At meal times, each adult sits at a separate table, and the girls share 2 tables. The girls make a huge racket until they turn on their phones and silence reigns. They tower over the little nuns, and usually wear an odd assortment of jeans or track suit pants, slippers or sneakers, and bits of bedding, like blankets. The little foreign nuns seem totally overwhelmed by them. I watched them say grace one evening – it was like a sprint, won by the loudest girl who proclaimed ‘AHMEN’ before the others had finished, and they all sat down together in immediate voluble conversation. What a handful! Basilicata Region is very poor and services like transport are limited, so I guess these girls come from remote villages and have been sent to Matera for schooling.

Back to Cabra Stories

Cabra Dominican College welcomes applications from all families seeking a Catholic education for their children.