On Friday 17 June, 2022, we gathered in the ‘Heart Garden’ at the front of the school to officially launch our Reconciliation Action Plan (RAP). The RAP, created by a dedicated team of students and staff, is our formal commitment to the reconciliation process and captures the steps we as a Cabra community will take towards reconciliation. We were honoured to host Uncle John Lochowiak, an Aboriginal elder and leader with strong connections to Cabra and our Dominican Sisters, to lead a Welcome to Country sung in the Kaurna language. Staff member and old scholar 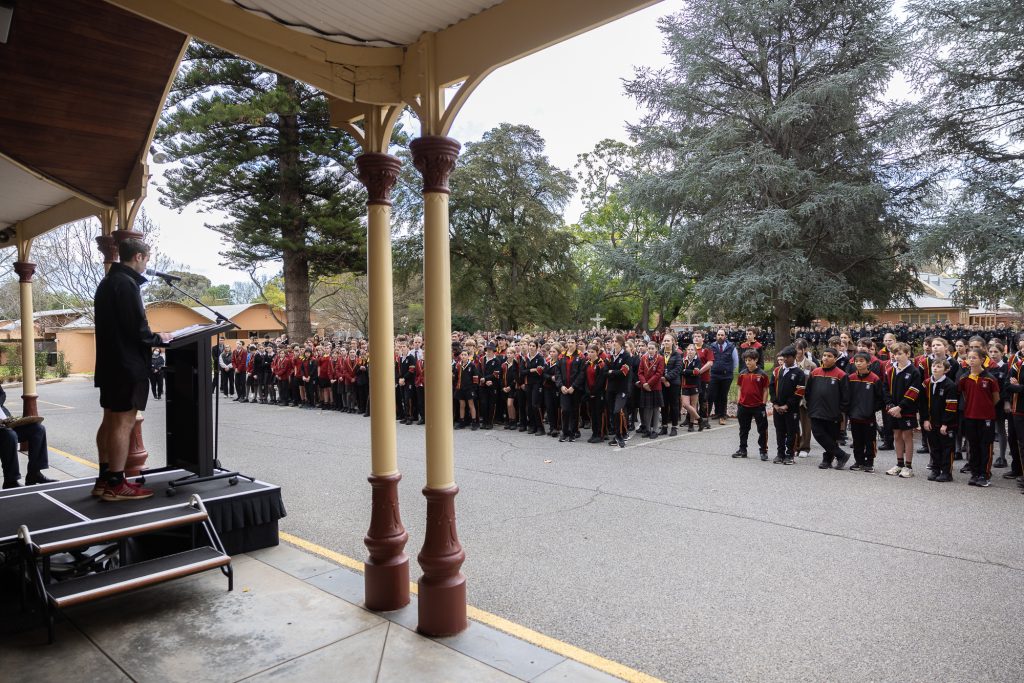 Brayden Heyward-Ferors who is a proud Gamilaraay man addressed the students and staff. Our whole community was then blessed with a moving Smoking Ceremony. It truly was a privilege for all students, staff and Sisters present to be a part of this special milestone in Cabra’s history. We look forward to collectively undertaking the real work to now enact our RAP.

I am very honoured to have the privilege of standing up here in front of all of you for the launch of Cabra’s Reconciliation Action Plan. As someone with Aboriginal heritage, I am proud of our school for taking this step, as reconciliation is an important thing we must strive towards together, not only as a school community, but as an entire country.

Some of you know my heritage, but most of you do not. I am descended from the Kamilaroi people, which is one tribe that makes up a larger group known as the Murri people. The Kamilaroi people are one of the four largest Indigenous nations in Australia, with their land extending from New South Wales right through to lower Queensland. A long time ago, these people were hunters and agriculturalists, with family groups spread out across the land on which they hunted. They spoke a language that is now no longer spoken, as the last fluent speakers died out in the 1950s. Increasing my knowledge of my heritage is something I have placed a large focus on in recent years, and intend to continue to do so, as I am proud to be an Aboriginal man.

To me, reconciliation is about respect, and about creating a better future for people of Indigenous descent. Indigenous people right now are experiencing racism, stereotyping, and discrimination. Indigenous people are proportionally the most incarcerated people on the entire planet. Only three percent of the Australian population is Indigenous, yet Indigenous people make up 28% of Australia’s prison population. Indigenous children are alienated from families at unprecedented rates, and Indigenous youth languish in detention centres in obscene numbers. Reconciliation is a way forward to ensure these statistics do not continue as they are. Through increasing cultural understanding and awareness, and developing respect for all people, reconciliation can occur. One of my closest friends is of Torres Straight Islander descent. I was right next to him on the footy field years ago when an opposition player made racist remarks to him. I saw what that did to him and how it made him feel. These sorts of instances still occur today, and this is where reconciliation is important, because no one should be made to feel dehumanised just because of their heritage.

Cabra developing a reconciliation action plan is an important step forward for us as a school community. We can play a role in not only creating a better future for Indigenous people but also educating ourselves on the history of the country we all live on. According to science, Aboriginal and Torres Strait Islander tribes have been living on this land for more than 60,000 years. There is so much history to engage with and learn about, and through doing so, each of us can increase our cultural understanding of the traditional custodians of this land. Not everyone needs to have extensive knowledge of Indigenous culture or other cultures around the world, but through engaging in some learning, we can all increase awareness of the fact that all cultures are different, and learn to respect these differences. Through the reconciliation action plan here at Cabra, each one of you can play a role in recognising the past, and also creating a better future. I have seen how successful a reconciliation action plan can be through being part of one at my football club. Through the creation of that group, we have established better relationships with other football clubs and Indigenous people throughout our football league. We have most importantly been able to repair fractured relationships with another football club, with whom a racism incident occurred a few years ago. It has been a major success, and I believe that here at Cabra we will see the same success, and hopefully along this journey as a school community, you can all learn more about the history of our great country.

Back to Cabra Stories

Cabra Dominican College welcomes applications from all families seeking a Catholic education for their children.